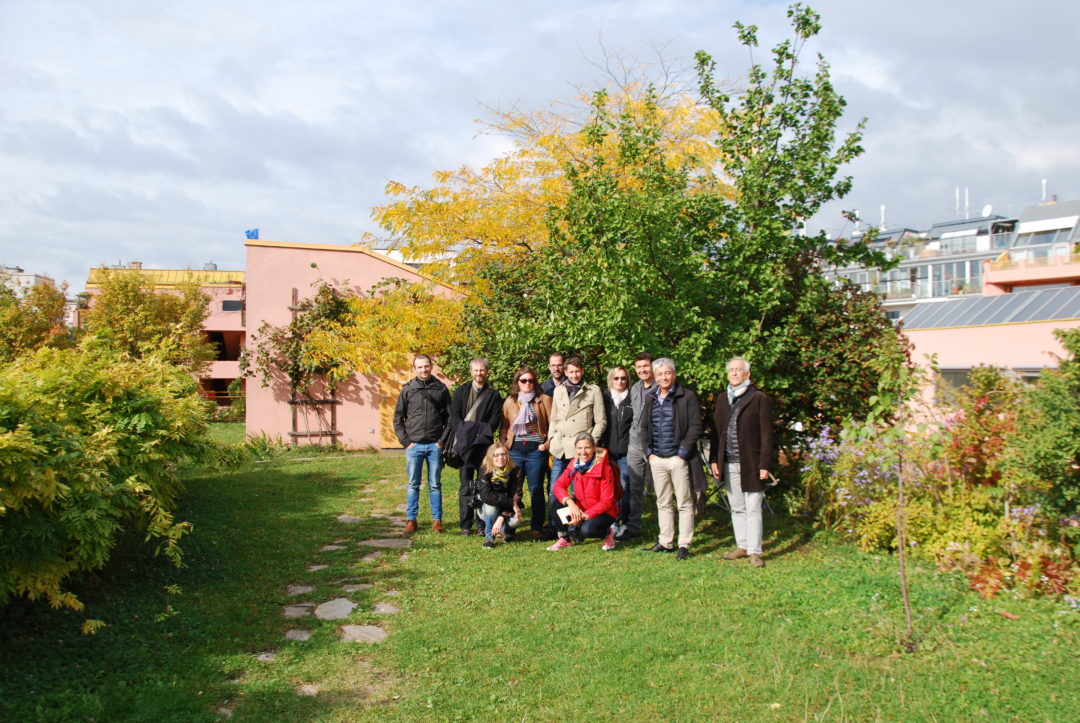 ADIVET on excursion in Vienna

On the green roofs and facades of the Austrian capital….

Vienna is a decidedly “green” city, half of whose surface area is made up of green spaces, not only thanks to parks and gardens but also to green roofs and facades. This first study tour proposed by Adivet  (the French Association of Green Roofs and Green Walls) aimed to visit some emblematic projects, roofs and façades, but also to meet the actors of the field.

The Adivet study trip was articulated between visits and meetings, the ensemble orchestrated by GRÜNSTATTGRAU (100% owned by the Austrian Association of Green Roofs and Green Walls – VfB). The participants were thus able to get to know the hotel where they were staying, the Boutiquehotel Stadthalle. It has green roofs and facades that are part of the hotel’s overall ecological approach.

Then the group visited the Sargfabrik. A former factory from the 1920s, it has a green roof terrace divided into three areas: the alpine garden, the barbecue area and the vegetable garden. Since 1996, the 1,400sqm of roof terrace area has been planted.

At MA 31 (Vienna Water Authority), Adivet met Susanne Höhendorf from Rataplan Architecture, who presented the project. The installation of the greening of the water service building is part of the overall rehabilitation of this district. On a structure fixed on the façade and whose load is taken up by the ground, the vegetation takes place in custom-designed planters and vertical cables. This project is scientifically monitored by the university.

The group then visited GRÜNSTATTGRAU’s premises before a presentation and discussion with Vera Enzi. GRÜNSTATTGRAU is an example: located in a building dating from 1870, they transformed the sloping roof at its top into a modest but very rich green roof. An illustration of the biodiversity provided by this roof: a family of ducks has settled there. Vera Enzi then presented an overview of the current state of building greening in Austria and Vienna in particular, the approach behind the creation of GRÜNSTATTGRAU and what the start-up offers as services.

The day ended with a visit to GRG 7 school. On this school, in addition to an indoor green wall in the entrance hall and in a classroom, a green facade in the courtyard, a flat roof has been installed as a biosolar to evaluate the interactions between greenery and photovoltaics, a study conducted by the University of Vienna.

The next day, the Adivet met Jürgen Preiss of MA 22, after having appreciated the greenery of its roof, initially covered with gravel. He presented the environmental policy of the city of Vienna. Since the 1990s, Vienna has developed a policy of sending the city. All new buildings must be green and therefore have a green flat roof as soon as a roof measures 12sqm. At a minimum, the substrate must be 8 cm thick, which triggers financial support from the city. Incentives also exist for facades, within the framework of building regulations.

Finally, Florian Krauss from GreenPass presented the software of the same name that allows to model, evaluate and certify architectural projects in their environmental dimension.

In total, two days rich in discoveries, exchanges and lessons, which make you want to continue and develop Adivet’s mission in France but also to meet our counterparts in other European countries.

Interested in an excursion in one of Europe’s cities?